What a difference! Jameson didn’t want to pose all curled up for this most recent shot. Even sleepy, he doesn’t fold up anymore. Still cute, but not quite as bendable anymore, haha.

I finally got my iMac figured out. I printed some photos at Sam’s to check the colors when printed, and everything is accurate but it’s a touch dark, so I will adjust my screen a bit more and it will be perfect! Whew, that was a pain in the neck. And I still need to go and transfer all my old photos.

This past weekend was pretty uneventful. Jameson continued to have a couple rough nights and I think we have finally determined why. I think he is starting teething! On Sunday, he refused to breastfeed, which is very unusual for him. Even when he’s not hungry he usually loves to nurse; we haven’t had problems since after his tongue tie was cut around 2 weeks. He only wanted to eat from the bottle. Later that night, we tricked him into latching on with the bottle and again with the pacifier. Finally he latched on himself at the late night/early morning feeding and has been good since then. But on Sunday evening I felt around his mouth and discovered a sharp little tooth under the gums! I read that teething is the most common cause of trouble with breastfeeding. At least things are back to normal, for now.

I bought him a Sophie the Giraffe, having heard lots of good things about it. Since Jameson still doesn’t grasp (regularly, anyway) more than his burpcloth or bib or mom’s hair and shirt, the giraffe should be fairly easy for him to hold onto to suck if he wants. 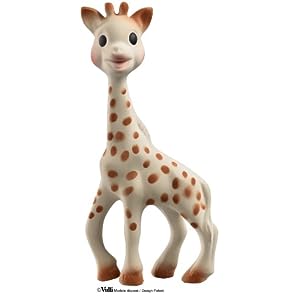 My co-worker’s son likes his a lot.

Recently I’ve been comparing Jameson with her son, who was born on the same day. My friend and I found out we were pregnant the same day, had the same due date, and ended up giving birth on the same day. Her son was 15 pounds even yesterday, and Jameson is only 11-1/2 pounds! She also talks about how close he is to rolling over, grasping things, and even almost sitting up himself when set there. I can’t help but compare a bit, since Jameson isn’t quite that advanced (even though I know Jameson is well within the milestone range and milestones can happen really early and really late, particularly things like crawling and walking). I’m sure Jameson will rollover in his own good time! This week, we are visiting our friends who had their baby a little over a month ago. We wanted to visit earlier but Jameson got his cold. I am excited to see another new baby 🙂

What You Didn’t See