Dear readers, so many exciting things happened yesterday! Jameson made his first “crawls” forward instead of just backward (before falling on his face), and he made his first baby joke!

I am not sure if baby jokes are considered a milestone, and I am pretty sure Brian might have been making fun of me a little but seriously: Jameson laughed for the first time because of something he did, rather than because of something outside him (ex., tickling or chasing the puppy or puppy licks)

He laughed when he was trying to roll away from me while changing, and I know he did it on purpose, because he did it again later. So cute!

Anyway, I need to get this forward crawl on video, and when I do I’ll share his adorable progression of crawling. Since I don’t have that just yet, I thought I’d share some of his favorite things, now that he is actually playing with toys (instead of just chewing… though he still does chew… haha) We have a lot of toys. In fact, Brian and I are going to break out the *gasp* toy box very soon. He probably doesn’t need this many toys, but I’m not too worried about spoiling him yet. He plays with all of them right now, in different ways.

His all time favorite toy for the past few months and now is his piano. The piano has it all: a rattle, music, lights, moving parts and convenient-to-chew handle. 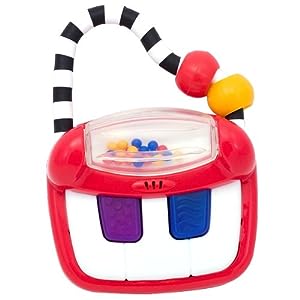 This just goes to show: the reviews on Amazon don’t mean baby won’t like the toy. This thing only has 3 stars… but there is another piano for $14 that is almost 5 stars. Which would you rather pay? $5 or $14?

We’ve really enjoyed watching his development in playing with toys. It started out as staring, evolving into batting at the toys above his head on the activity mat. Then we had reaching and grasping, and later turning in place in the exersaucer to chew on all sorts of toys.

Finally, he learned how to work some of the toys, first with the spinning rattles like in the piano above. The last one on the exersaucer that he figured out was the penguin that you have to push down to get the balls to move inside.

Now that he can sit, he is playing with all the toys, shaking, chewing, rattling. We decided he needed a few toys that stretched his skills. We bought this great toy which took him a day or two to figure out some of it’s parts. He hasn’t gotten the hang of getting it to move and play music, but he is playing with the alligator and spinning bird… soon he’ll be working the rest!

And it won’t be long before he’s figuring out toys like this one, with it’s knobs and levers. He already pushes down on the boppers. (Hey, no batteries in this toy!) His second favorite toy right now I think is the xylophone piano. It’s a little advanced for him, but he loves to pound on the keys, and to eat the (thankfully one piece) sticks. This is an old toy though, I am not sure if they sell it like this anymore! It is however similar to this one. Like most babies, he enjoys the stacking cups. We bought these cute rubbery blocks for him to chew on, but he hasn’t shown much interest– until it also becomes a stacking (or rather, a knocking down) game! Likewise, the classic ring stacker is fun right now to knock all the rings off, put rings on baby’s head, and to chew on. Later maybe he’ll start to stack the rings back on himself. A newly semi-mobile baby also enjoys finding new places, like the vent. This will be an accident waiting to happen this winter, but for now, it’s just cute. Oh, the puppy is a pretty fun toy too. And the puppy’s own toys. Sasha knows which toys are hers, but Jameson hasn’t figured out yet which ones are his. Hmmm…