This year, we got to see Santa 3 times. We made our annual visit to see Santa at the tree festival before Thanksgiving, and then we also got to visit the North Pole to see him on the Polar Express the weekend before! Both Jameson and Coraline came in matching pajamas, and we met our neighbors there as well.

The Polar Express provided assigned seating with our tickets this year, which made the journey more relaxed (or as relaxed as it could be on a train with 8 people in 6 seats since the two youngest didn’t require seated tickets) We did a lot of snacking. My snack-stealer, Coraline, tried to eat Lily and Peyton’s dinner. Well, Jameson was no exception either. The train did give everyone hot chocolate and cookies. Neither of the kiddos really like hot chocolate (I haven’t really let Coraline try it) but the cookies were a hit!

Coraline kept crouching down between the seats, and sitting on the diaper bag as a little seat of her own. Then we had a “Ho Ho Ho” contest, and Jameson really got into it! As we approached the North Pole, the kids had to wipe down the windows to see out. It was warm in the train car and a wet misty and cold outdoors. There wasn’t any snow at the North Pole this year, though! Santa climbed aboard the train and visited with eat of the kids. Jameson was shy but excited and happy. Coraline didn’t want to take the bell that Santa tried to give her, but was delighted with it after she had it in hand, ringing it over and over. During the final part of our journey, the conductor punched our special tickets. Coraline by this time was restless and tired, but I was really happy with how everyone behaved overall. Next year though we will definitely have a full 8 seats for all of us. It was a bit tight! Our last meeting with Santa was a special night where our neighborhood invited Santa to ride on the fire truck and pass out special gifts before Christmas! All evening the kiddos rushed to the door thinking they were hearing sirens (Brian did, too!). Grandma and Poppa joined us for the evening as well, and Aunt Melissa came but had to leave early. We had her scope out the neighborhood when she left to see if Santa was close, so we could decide to keep Coraline awake or not, and luckily it was almost to us! 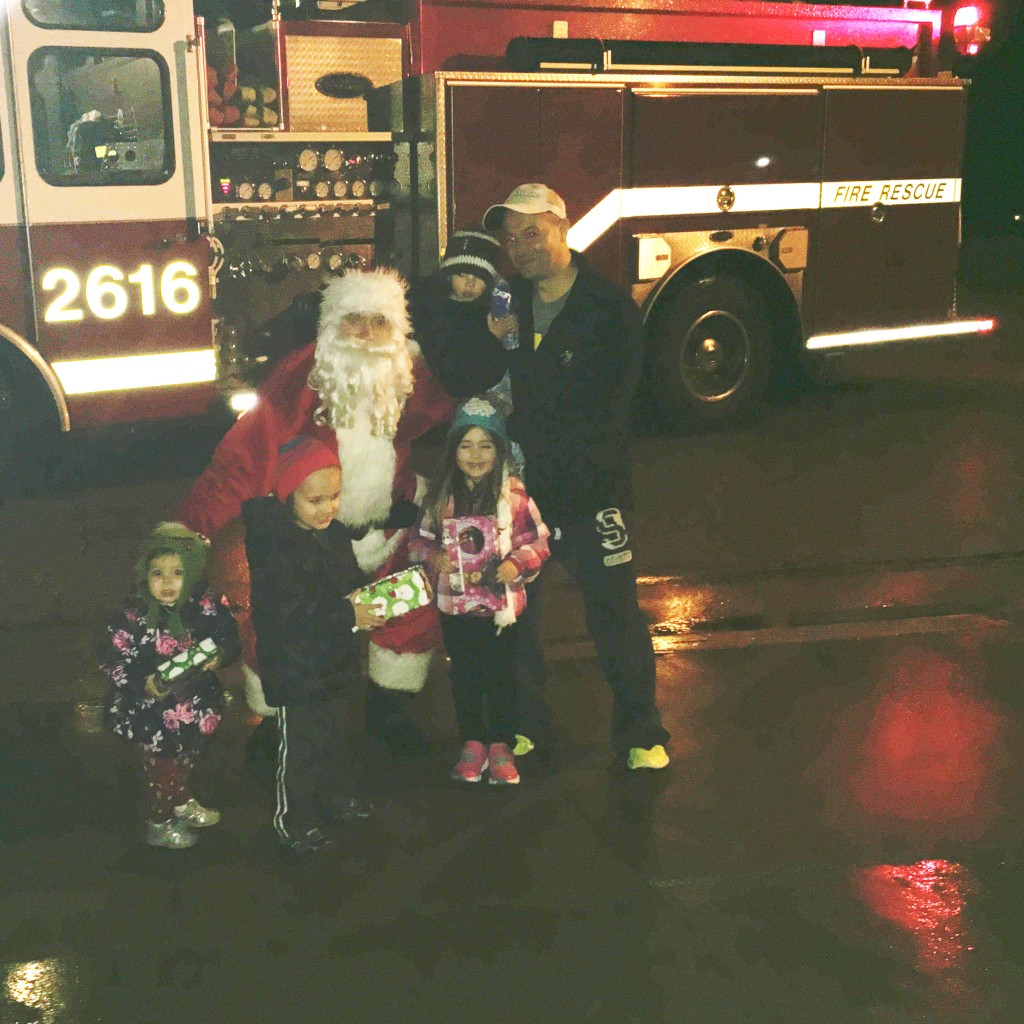 Both kids loved their gifts. Jameson got a reindeer to put together in different ways, and Coraline received a little bear puzzle with different shoes and clothes and faces. It was such a nice thing for the city to do, and the highlight may have been the fire truck, not just Santa! We really had some magical Christmas experiences this season!