Well, it’s the beginning of the end of babyhood, I suppose. It feels kind of symbolic to eliminate the pacifier.

I had been thinking pretty hard about it for a while now, figuring out when the “right” time would be. When he doesn’t have any cold, when he’s not teething, when he seems ready. Maybe this summer? Not too long though, I don’t want to have to explain the disappearance with fairies or something.

But as usual, things tend to work themselves out. We forgot to bring a pacifier in for Jameson on Wednesday and Thursday last week, only finding out Thursday evening at pick up that the daycare had been giving him a “loaner” which he knew wasn’t his. Consequently, he wasn’t really sucking on it but more holding it for comfort.

“Well, how is he doing falling asleep with it?”

“It takes longer, but he seems fine.” 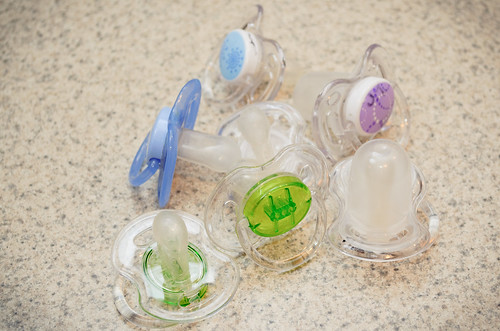 Jameson never stopped using the up to 6 months pacifiers (the small ones), but we had purchased bigger ones for him he never used. We swapped all these ones out for the big ones, knowing he wouldn’t suck on them but hoping he would hold on to it for comfort.

Friday night was his very last night (little did he know). On Saturday, we put him down for his nap and bed with the big one. He does pretty well, and fell asleep on me for bed time. Day 1 is a great success. I am winning dad over to my side (he was not completely on board at first).

Day 2 Jameson seemed to figure out that everything had changed. He had a hard time going down for his nap, requiring soothing from both mom and dad at turns before finally falling asleep on dad. He points to the big pacifier, I give it to him, he pushes it away and points to it again. It’s clear he knows what he wants, but he’s not getting it.

Then, he talked himself to sleep on Sunday night, which is wonderful and was a final reassurance that this is going to work.

As an aside, dad notices his last molar is broken through, which must definitely be another positive sign. He has 12 teeth now, so I know it’s an appropriate time to get rid of the pacifier. The next teeth to come in don’t come for another couple months, and it’s healthier for his oral development to get rid of it.

Day 3. Monday. Presumably he continues to do okay at daycare, but going to bed was hard. Dad gave up with him and brought him back downstairs. Perhaps it was the time change and he wasn’t tired yet? An hour later we try again and he cries himself to sleep after two or three more attempts at rocking to sleep (Jameson pokes at my eyes and giggles to himself. It is definitely not working to rock him to sleep this night.). It only takes about 20 minutes total the second time, not counting the failed bed time earlier.

When he falls asleep, he crashes. He doesn’t get up in the night, which is a blessing. We definitely still have a good sleeper even without the pacifier. I am a lot sappy about this whole thing, now.

Now we are on Day 4. We are totally committed. This is it. I am prepared to throw away his old, small pacifiers tonight I think. Maybe I’ll put one aside, just in case, since we’re leaving him overnight at his grandparents’ this weekend.

And I wonder if we should just get rid of the big pacifier too? Is it worse, him seeing this one as a reminder of the ones he can’t have? Now I am worrying about his mental state. But he’s resilient. I’m sure he’s fine. He dropped the big one from the crib last night as he was crying and then just went to sleep without it (That is probably the answer to my question.).

Vivienne Turns The Big One